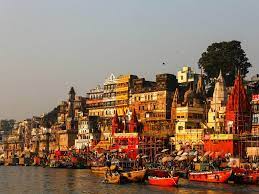 There are almost 100 ghats—places with steps leading down to the water—along the holy Ganges River in Varanasi. The main group contains around 25 of them, and it extends from Assi Ghat north to Raj Ghat. The ghats date back to the 14th century but most were rebuilt, along with Varanasi, in the 18th century by Maratha rulers. They are either privately owned or have special significance in Hindu mythology, and are primarily used for bathing and Hindu religious rituals. However, there are two ghats (Manikarnika and Harishchandra) where cremations are solely performed.